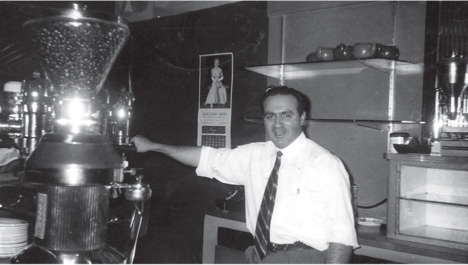 From his long-running shop on Davenport, Giacomo Zuccarini was the man who taught Toronto how to make a good cup of coffee.

In 1954, Giacomo Zuccarini imported the very first espresso machine to Toronto, a city where it would now be hard to find a block without one.

He was 33 years old at the time, an immigrant from Cerqueto Del Tronto, in Italy’s Abruzzo, but his path from the family farm to that landmark achievement was anything but straight.

At 14, Giacomo left his parents to earn a better living for himself and his family. Faking a Roman dialect, he was able to find work at restaurants in the country’s capital. Several years later, while serving his compulsory year of military service, Italy joined the Second World War, and the 18-year-old was sent to a North African port to receive supplies.

When he was captured by the Allies, Giacomo was given his pick of pris- oner-of-war camps, and he chose the Americans’, correctly predicting they would have enough money to feed the captives. In short order, he improved his situation even further by bribing guards to let him out at night to go dancing in Casablanca.

When the war ended, Giacomo shipped off to London – where he was a waiter at the Savoy Hotel – before nally departing for Toronto in 1951, at the age of 30, to seek even greater opportunities. Only he didn’t like it here. He’d come from small, but had caught the bug for big – which Toronto was not – and so, shortly after arriving, he headed to Mexico City.

That foray was also short-lived: Giacomo landed in jail for working illegally, and got kicked out of the country. Back in Toronto, an Italian he’d met in England – a dentist named Pino Riservato – wanted to partner up and import espresso machines made by an Italian named Achille Gaggia.

To promote the titanic appliances, which would have looked like small Cadillacs sitting on the counter, they opened up the Sidewalk Café. The restaurant at Yonge and College boasted the city’s first wood-burning pizza oven and featured a cashier – Giacomo’s then-girlfriend, a Hungarian cont- essa – who sat inside of a welcoming station fashioned as a giant coffee cup.

As splashy and successful as it was, the venture lasted only about a year, when Riservato secretly emptied their bank account and ed. Giacomo was left with the machines, which he continued importing and sold out of his garage. The budding entrepreneur ran that small-scale operation for a number of years before finally setting up in a storefront at Eglinton and Caledonia.

During that time, he also met and married Karin, a German 16 years his junior. Their eldest daughter, Jackie, began working at the shop at the age of 14.

From the late ’70s until her father’s death, Jackie worked alongside Giacomo in the shop – which relocated to the corner of Davenport and Bristol in 1981. She says her father charmed everyone, from eccentric restaurant owners looking to up their coffee game to the early adopters seeking home machines.

She remembers hearing the thick Boston accent of the late legendary Italian restaurateur Michael Carlevale booming from the back room as her father worked, and that he was often accompanied by his longtime partner Joe Bersani. “When they started out in the early ’80s, they were pretty young and they looked up to my dad as kind of a father figure,” she says, “as well as a direct link to the Italian culture of their grandparents.”

Jackie was also there in the mid-’90s, when media magnate Ken Thom- son arrived with his wife, Nora, to drop off their home machine for repair. They were impeccably dressed, she says, but their Gaggia’s steam arm was covered in a hardened lm of milk. “My father immediately admonished them for bringing it in for service so dirty,” she says, noting that Thomson
blamed his wife.

After they left, Jackie enlightened her father as to who they were but he shrugged it off. “He dealt with people from all walks of life, but he treated everyone the same,” she says. When the couple returned the next day, Thom- son told Giacomo that he was “a good man.”

Nobody needed to tell Jackie that. These days, espresso machines have become more complicated and time-intensive to service – and the shop now carries a variety of brands – but back in the early days Giacomo would stop whatever he was doing, including eating his lunch, to repair patrons’ Gaggias while they waited. “It was calming for them to go to the back and talk with him. Some people would just leave their machines, but a lot of people would look forward to spending an hour chatting with my dad.”

Jackie has been running the shop on her own since Giacomo passed away in 2000. She doesn’t fix machines herself, and she’s now handed over sales and training to staff. Still, she enjoys meeting up with café owners she got to know in the days when it was just her and Giacomo – like Balzac’s Diana Olsen, to whom she first sold a machine 23 years ago. If necessary, Zuccarini will also occasionally step in to coach a novice espressophile on how to properly steam milk, or gently explain that their machine’s malfunction is actually an “operator issue.”

All the while, over Jackie’s shoulder hangs a painted portrait of Giacomo, posing with her sister, Janet. Speaking about him 18 years after his death still causes her to choke up, and she takes a few moments to compose herself. “I liked being around him,” she says. “When I was a kid, and he would force me to come in, I would be so mad and wouldn’t talk to him the whole way down to work. But we’d always be friends by the end of the day. I couldn’t stay mad at him.