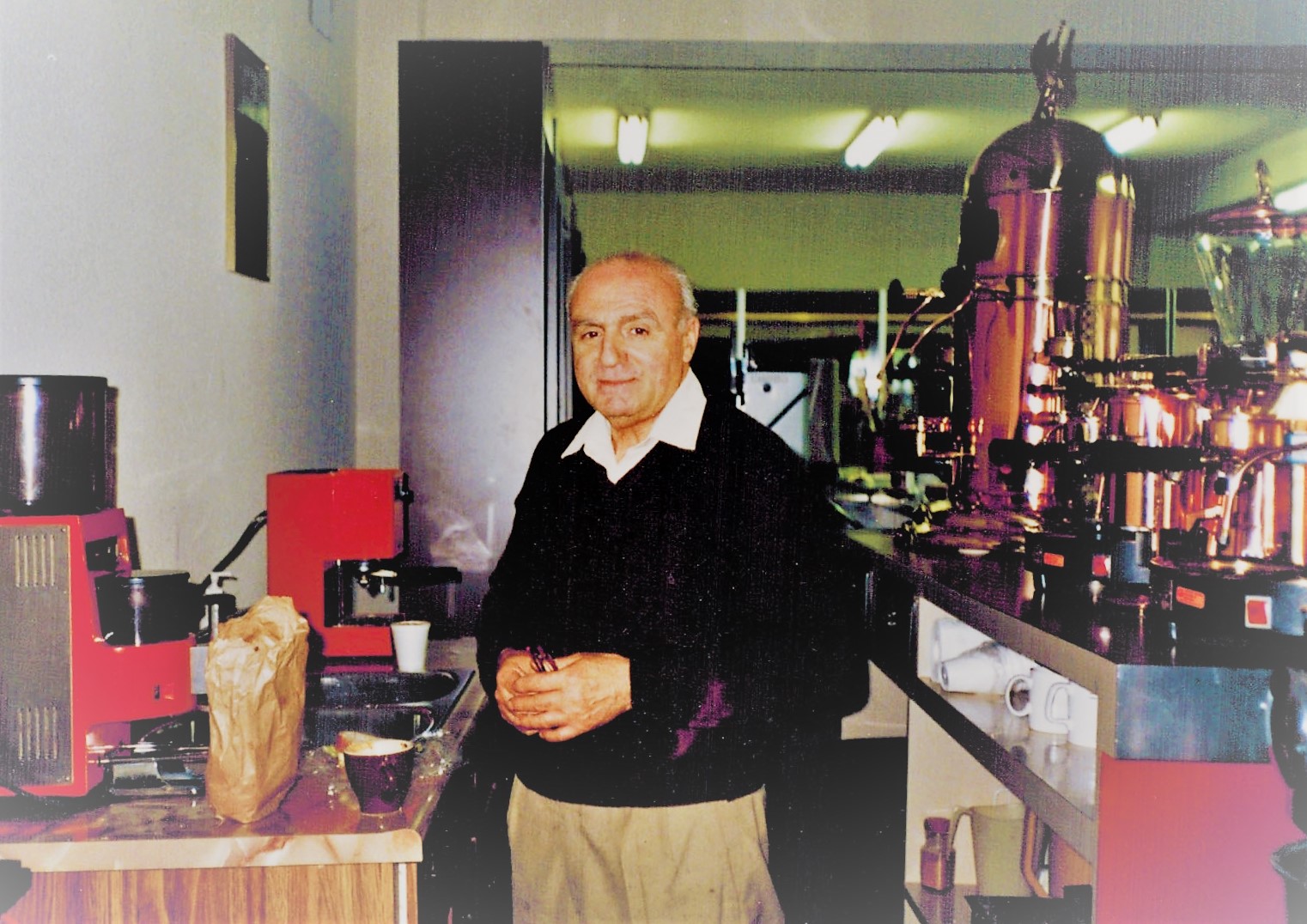 by Richard Syrett, The Globe and Mail. Reprinted from June 8, 2000

Restaurant pioneer,
dancer, lover of women
– and a good cup of coffee.

____________________________
Long before Starbucks or Tim Hortons there was Giacomo Zuccarini. For 46 years, as the exclusive distributor of Gaggia espresso machines in Canada, he made it his life’s work to teach Canadians to make and enjoy a decent cup of coffee.

When he arrived in Toronto in the early 1950s, by way of Mexico City, Casablanca, London and Italy, it was not love at first sight. Too many dirt roads, not enough culture, and the coffee . . . aqua sporca! Dirty water.

So, in 1956, Giacomo opened The Sidewalk Café at College and Yonge as a way of showcasing a new lever-system espresso maker he had imported from Italy. The café boasted the city’s first heated patio, and its first wood-burning pizza oven. The star attraction was Giacomo’s stunning girlfriend, who was said to be Hungarian countess. She greeted patrons perched inside an enormous coffee cup. The place was a success — until one night his partner skipped town with all the money, leaving a devastated Giacomo no choice but to close down. Stung by this betrayal, he vowed his children would learn self-reliance.

When Giacomo married in 1964 he hoped for a son. Instead his beloved wife Karin gave him three daughters. While he tried to hide his disappointment, he was never really sure how to relate to the girls and treated them like boys. “No kid-glove treatment for the Zuccarini girls. We were only 11 and 12, and Pa had us fixing and lifting these heavy espresso machines,” recalled his eldest daughter Jackie. “He’d say, ‘C’mon, you can do it, you’re strong.’ ”

Giacomo’s own youth was the stuff of good Italian opera. Had his mother married according to her uncle’s wishes she would have inherited a fortune. Instead, she married for love and lost everything. The family background was one of wealth and privilege, yet Giacomo grew up poor with little formal education. A disputed will led to a court order that split their villa in half by means of an interior brick wall. The servants’ quarters housed pigs.

Giacomo left the farm in the late 1930s and found work waiting tables at London’s fabled Savoy Hotel. No sooner had he acquired the coveted job of maître d’ when the Second World War erupted. He was drafted into the Italian army and landed in the North African heat in a ridiculous wool uniform. The Allied Forces overran North Africa and he became an American P.O.W., yet he maintained his zest for life: he’d bribe the guards with cigarettes, steal out of camp and disappear into Casablanca to dance until dawn.

Throughout his life, he boasted that he never missed a day of work — even after being diagnosed with leukemia in 1994. Last Christmas, despite feeling terrible, he forced his failing body into the shop. Jackie arrived to find her father huddled over his espresso machines and gasping for air. “It’s that damn fagioli your mother made, it gave me indigestion!” he told her. Doctors later found that Giacomo had suffered two heart attacks.

Every day in hundreds of cafés, bars and restaurants across Canada, coffee drinkers unknowingly pay tribute to Giacomo Zuccarini simply by enjoying a cup of espresso. But a life cannot be measured out in coffee spoons. Rather, we can count a thousand dance partners from Rome to Mexico, tens of thousands of satisfied customers and innumerable souls warmed by his generous smile.